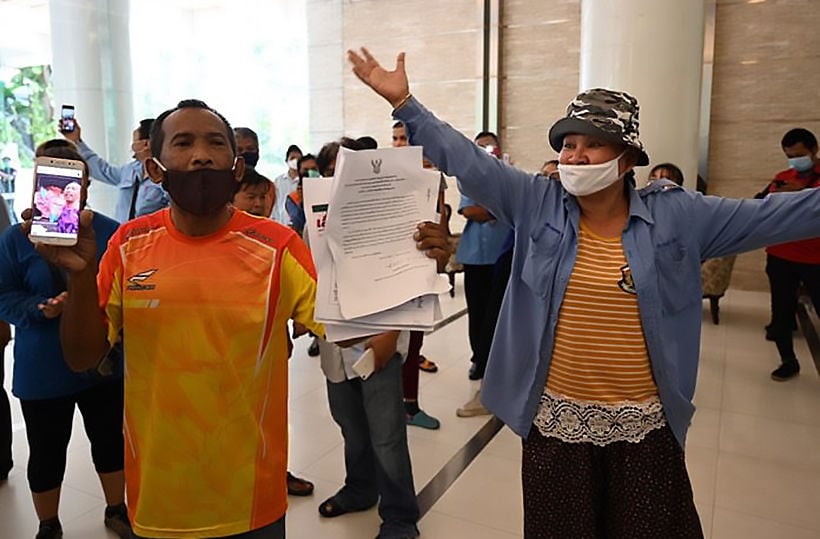 Media outlets are being duped by highly visible protesters trying to attract media attention in their efforts to receive the 5,000 baht “No One Left Behind” handouts, according to Finance permanent secretary Prasong Poonthanate. He even accuses the protesters and says many have already received the subsidy cash, but are demanding more. As an example he mentioned the recent case of a taxi driver who tried to scale the perimeter fence of the Finance Ministry as media filmed the incident.

The cabbie, identified as Pongpicharn Thanathirapong, was at the Ministry on Thursday to demand that the handout be wired to his account that day, saying he’d gotten a text message telling him to show up at the Ministry to file his claim.

Prasong told the media on Friday that the Ministry is ready to help people affected by the Covid-19 pandemic, adding that his officers have been working nonstop to speed up distributing the money those in urgent need. He also mentioned another protester who, he alleges, brought arsenic with him, which he had intended to swallow in front of the media.

On Monday, a 59 year old woman swallowed a large volume of rat poison in front of the Finance Ministry after shouting “None cares about me! There’s no one to take care of me!” She collapsed and went into shock, and was rushed to hospital. She survived. Several other suicides have been linked to desperation over the financial ruin brought by the pandemic.

Prasong alleged another incident in which a woman collapsed in front of the Finance Ministry, then falsely accused a guard who rushed to help her of trying to assault her.

“What can we do? We are civil servants who must be patient and try to explain the situation to them. We asked them to return home after completing complaint forms, to avoid the risk of spreading the virus, but some refused.”

He urged the media not to accord the protesters “an undue level of coverage.”