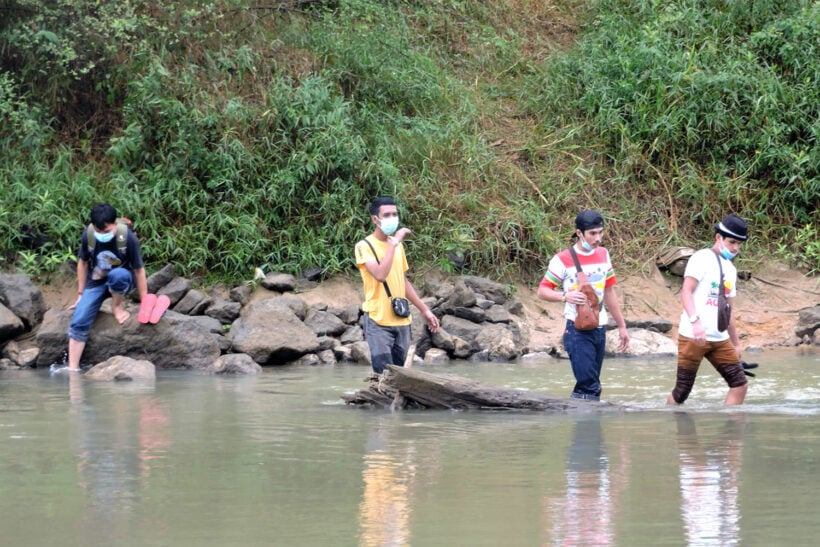 Another 25 Thai workers were arrested this morning for illegal border crossing after wading across the Kolok River from Malaysia to Thailand.  They were placed in mandatory 14 day quarantine and charged with illegal entry. They are part of a group of Thai workers left stranded in Malaysia, which has extended its lockdown order to May 12.

Their desperation is nothing new. Hundreds of Thai workers have been stranded in Malaysia, some for days or weeks, often without food or money, due to travel restriction and paperwork requirements brought on by the Covid-19 outbreak.

They were caught on the Thai side of the river by a team from the 48th Ranger Regiment patrolling along a 3 kilometre stretch of the river after learning that a large number of Thai workers had chosen to cross the porous border via natural channels.

The 25 were taken to the Sungai Kolok border checkpoint where they were charged with illegal entry, and are to be sent to their home provinces for 14 day quarantine, pending legal action.

One Thai man, who worked at a Thai restaurant in Kuala Lumpur for over 10 years, said he left the city without any money in his pocket and had not eaten anything since leaving Kuala Lumpur. He said he and many others decided to cross the border via the river, fully aware it was illegal. But in order to return via the legal border checkpoints, they needed money and travel documents.

“We badly wanted to come home. It is time for Ramadan.”

The man says he was treated unexpectedly well by police and military officers. After having their temperatures taken, he and the others were were given “plenty of food and advice.”